Kendall was born in 1971 and was brought up in a family where hunting and shooting was a time-honored tradition.  His childhood years were spent growing up in Salem, Missouri, where he continues to make his home with his wife and children to this day.   Like many kids growing up in rural areas of the country, the importance of gun safety as well as marksmanship skills were taught and emphasized at a very young age.  Kendall is the Treasurer for N.A.P.S.I.

While in his mid twenties, Kendall spent much of his time archery hunting and participating in archery competitions.  He competed at local, state, and national levels.  Through his participation in these national competitions, he became interested in the effect stress had on the mind’s ability to perform given tasks. 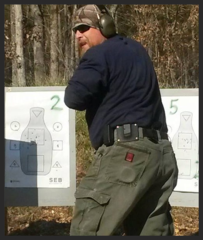 In 2008, Kendall's brother was stabbed during a road rage incident. It was at that time that Kendall's primary focus shifted from competitive archery to the defensive use of firearms.  He soon obtained his CCW permit and made the daily carry of a defensive firearm an integral part of his lifestyle.  A couple years later, both Kendall and his brother took the necessary steps to become certified to teach state-sanctioned Concealed Weapons courses in an effort to help others obtain the necessary skills needed to better protect themselves and their families.  Soon after obtaining NRA Pistol Instructor Certification, the two brothers founded their own training company, “Brothers N Arms Firearms Training”.  Since the formation of their business, Kendall has provided state-mandated instruction to hundreds of Missouri citizens as both lead and assistant instructor.

Kendall has continued to study the defensive arts and search for the best methods of defending one’s self with a firearm as well as with other means of self defense.  In January, 2015 he accepted an invitation to participate in a new training group which eventually became N.A.P.S.I.  Within the coursework that has been developed by the N.A.P.S.I. team, he has found what he believes to be the most relevant and efficient defensive firearms training available to the public at this time.

NRA Personal Protection Outside The Home