Nic has been involved in firearms training since he was thirteen years old.  As a teenager, he would accompany his father to Missouri Hunter Education courses to provide logistical support.  Much of his duties involved taking registration and distributing handouts but he was also frequently asked to demonstrate the operation of the various firearms during lesson presentations. 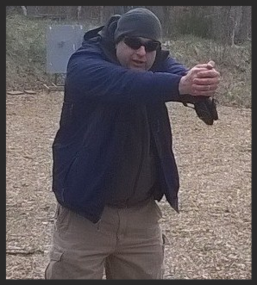 When the opportunity presented itself in 2010, he attended an NRA Training Counselor Workshop and received a recommendation upon its completion.  He also received an upgrade to Chief Range Safety Officer at the same time.

With his new appointment as a training counselor came an increased demand for classes.  That prompted his decision to allow his hunter education credentials to expire so he could focus on more hands-on and practical training.

In an effort to be better-rounded in his knowledge of firearms instruction, he took the steps necessary to acquire certifications as an instructor in NRA Shotgun and NRA Rifle in the first half of 2015.

Nic believes that the best instructors are perpetual students and should always strive to improve their own knowledge, skill and attitude.  He strives to take multiple classes each year as a student in order to expand his knowledge and skills.  He is also aware that teaching skills, like shooting skills, are a perishable and can only be maintained and improved through regular use.

Nic's students’ needs come second only to safety.  He understands that a significant amount of trust is placed in him when a student spends his or her time and money on one of his courses.  He holds himself to very high standards in knowledge, skill, attitude and ethics and conducts himself in accordance with those standards.

Although Nic retired from the NAPSI Board of Directors in 2021, his contributions and dedication to the program from the beginning were invaluable to the development and evolution of the organization.