Tim graduated from Rolla Technical Institute in 1994 as the Distinguished Honor Graduate for highest GPA in the Respiratory Therapy Program.  Later that year he took a position with Vencor Hospital as a Facility Manager.

In 2015, Tim was asked to join a group of like-minded professional shooting instructors who felt the need to develop a curriculum of defensive firearms training to meet the needs of today's Armed Patriot. From this collaboration N.A.P.S.I. was formed.

Tim was proud to be a founding member of N.A.P.S.I.

A few words from the N.A.P.S.I. Leadership Team:

In January, 2022, our dear friend, business partner, fellow instructor, and valued member of our collective was taken from us, his friends, and his loved ones much too soon.  Tim was an integral part of the NAPSI team.  He always showed up to any meeting or training event well-prepared and ready to share his knowledge, learn new things, and enjoy the comradery that came with being a part of the NAPSI team.  Tim made many important contributions to the NAPSI Training Program over the past 7 years, including playing a major role in the development of the NAPSI Basic Defensive Shooting Skills (BDSS) coursework.  His contributions to the program will never be forgotten, and his warm friendship will be missed in perpetuity.  Rest in peace, our brother, Tim.

Tim was the owner and lead instructor of Patriot Armed Defense. Tim was born in 1959 and was lucky enough to have a father (Woodrow) and two older brothers that were avid shooters, hunters and outdoorsmen. Tim’s father taught him to shoot at the age of six. "Woody” was also an avid deer hunter and the annual pilgrimage to deer camp each fall with his three sons was a highlight each year. In 1970, Woody purchased a Smith and Wesson Model 28 .357 magnum and introduced Tim to pistol shooting and a love affair with handguns ensued.

Tim was a proud veteran of the United States Army.  Following in the footsteps of his father and older brother, he enlisted in the Army in 1977 and re-enlisted again in 1984. Serving as a combat medical specialist Tim qualified expert with the M16, M1911, M60 and M67. 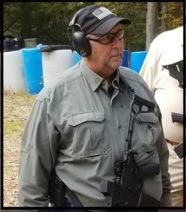 In Memoriam - Rest in Peace, our Brother Tim